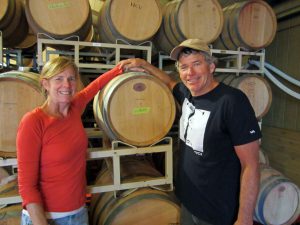 Tim Gorham and Susan Cobb came to the Santa Ynez Valley to live in 2004 from Houston, Texas where they first met and were married. Tim was born in Albuquerque, New Mexico in 1951 and received geology degrees from the University of Colorado (BA, 1974) and a MS in geology from University of New Mexico (1979). In 1979 he was hired by an energy company. One of his many assignments led Tim to Ventura, California in 1982 where he was in charge of searching for energy in the Santa Ynez Valley. His geology position allowed him to travel all over Santa Barbara County. Back then the “Valley” was very rural with mostly cattle and horse ranches. Very few vineyards were planted, but the beauty of the area struck him as a place he would want to live someday. Over the years Tim and Susan have traveled together to many wine regions including France, Italy, Greece and of course Napa Valley. Traveling to world class wine regions is a big part of their enjoyment in life.

After searching up and down the California coast for properties, they finally settled in the Santa Ynez Valley in 2004. The “Valley” was quickly becoming a recognized wine growing region. Tim and Susan selected a home on the east side of the Valley where the climate was the warmest and ideal for growing Bordeaux grape varietals such as Cabernet Sauvignon. After examining soil samples and consulting with vineyard experts they planted their one acre vineyard with 100% Cabernet Sauvignon grapes (clone 103) in 2006. With consultants and friends to coach them, they managed their own vineyard and learned as they went. They are committed to farming organically using only organic sprays for mold in the spring and weeding by hand. Their learning curve has been steep but now with 11 years under their belt they are producing some excellent quality grapes that result in great tasting wines.